As Stan Lee would say, “Welcome, true believers.” The time has come and Guardians of the Galaxy Vol. 2 is out and man, oh man, is it a fun movie. It has everything we have come to expect from Marvel, with everything laughs and action – but there is a lot of character development in this volume. We also get loads of interesting after credits scenes, as we have come to expect with every single Marvel movie.

The movie starts with the Guardians working a job to protect some batteries and right away the jokes start flying. The opening sequence is reminiscent of the Deadpool opening but this time it’s Baby Groot, still voiced by Vin Diesel, who is really the star of this sequence. Music starts playing and the entire opening is hilarious. But when the music starts and the movie gets going, we are pulled into what’s been happening in the background.

When the job is done, we find that Star-Lord, played by Chris Pratt, trying to collect what they are due for the job and that Rocket, voiced by Bradley Cooper, has stolen some of the batteries they were supposed to be protecting. A space fight ensues, and they are narrowly saved by Ego, played by Kurt Russell, who invites them back to his planet. From then on it is an action-packed thrill ride mixed with plenty of laughter and some really good tear-jerking moments.

The special effects in this installment were wonderful; it was a really good mixture of both practical and CG effects. There are a quite a few shots where you would swear that Rocket was an actual talking raccoon. Even with special effects being a big focus on modern filmmaking, the makeup and practical effects are wonderful. In this installment they made an actual mold of Dave Bautista, who plays Drax the Destroyer, to give his body the scarred and torn up look. And though Zoe Saldana is turned completely green to play Gamora, the adopted daughter of the villain Thanos, she looks natural and not like a person who has been just covered in green make up.

I would say the most impressive feat that the makeup and digital artists managed to pull off was making Kurt Russell look at least thirty years younger for the flashback parts of his portrayal of Ego. 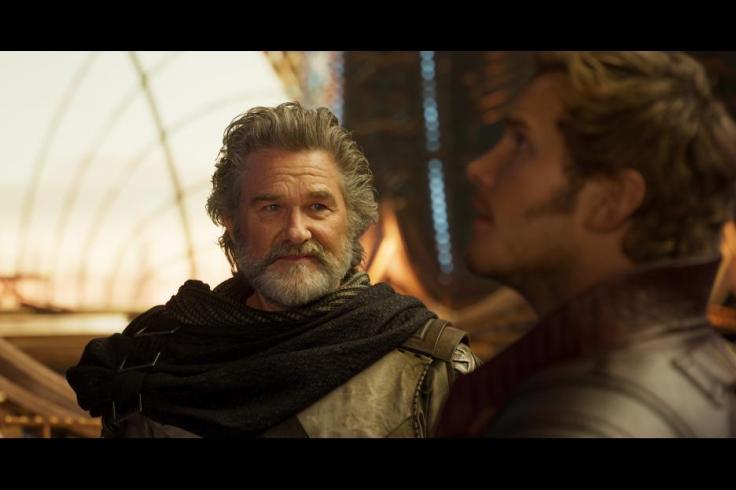 I really only have two real complaints for this super enjoyable thrill ride. The first one is that there are far too many shots where you can tell that it is meant to be seen in 3D. You know the kind of shot I’m talking about: where it kind of slows down and really makes sure to pan around the characters so that they really pop out if you have spent the extra money for the 3D version. But that is not that big of a blemish on this film.

The other issue I had is that it is hard to feel the scope of the real danger that the universe is in due to the villain. I understand that this is a movie about the team coming together as a family and the truth about Star-Lord’s origins, but the writers still decided to put the universe at stake because the characters are, after all, the Guardians of the Galaxy. However, you never truly feel like there is real peril facing the universe though you feel the danger and heartbreak that happens to our heroes. They portray that with expert acting and writing.

So what is the final verdict for Marvel’s most recent movie? I would say that this film gets 4.25 talons out of 5. It is a fun adventure from start to finish with plenty of laughs and even more great cameos by other Marvel characters. I would say that this movie is a must see and I can’t wait to go see it again to relive the ride.

Guardians of the Galaxy Vol. 2 is in theaters now and is rated PG-13.